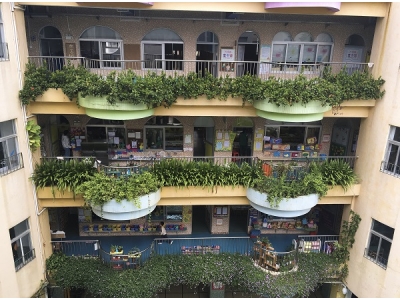 Kindergarten covers an area of 2763.05 square meters, construction area of 4214.2 square meters. Park tree-lined, beautiful environment, facilities and equipment to achieve landscaping, afforestation, child-oriented. In 2012, the overall reconstruction of the backseat complex and the stadium was completed. Now it has a dozen indoor and outdoor activities such as a large-scale science children's palace, a beauty salon, a reading room and a large climbing wall. It is a teacher full of humanistic atmosphere And children grow together. Campus Radio will be two teaching office building divided into two major regions, each region is divided into indoor, corridors, outdoor and other subordinate regions, the use of PX-3000 powerful partition paging paging function, to ensure that the radio can be used accurately pinpoint , Do not interfere with other areas. The PX-3000 Bus Matrix public address system is a new and highly competitive digital broadcast system and commercial audio system that delivers audio and control signals over a bus. The entire system has: equipment streamlining, highly integrated, powerful, flexible and convenient control features, all kinds of logical interface is complete. For integrators and audio-visual designers and even users, the big feature is simple and intuitive, do not need to master too many product protocols and a variety of professional audio knowledge, so that the design and operation of professional audio systems easier.

Using this series of amplifiers, kindergarten for the sound quality and stability of the broadcasting system has provided a guarantee.

The amplifiers used in this set of broadcast systems are the DA-4600H, a thin-film, DA series, four-channel, modular fixed-voltage digital amplifier that achieves 80% -90% efficiency and 60% less energy consumption than analog power amplifiers. Low-heat design can easily cope with the demanding long-time emergency broadcast fixed installation requirements; DA digital power amplifier provides a full range of protection circuit to deal with over-current overload caused by short circuit, DC voltage anomalies output and heat sink temperature increase; lightweight design makes the installation of equipment easy, compact 1U height can greatly reduce cabinet space. At the same time, transportation and warehousing costs are also saved. The power supply of each channel is independently designed so that failure of one channel does not affect the normal operation of the other channels. Similarly, one of the channels can also be used as a backup amplifier. Outdoor use by the kindergarten for the Thinuna brand SK-8120 outdoor weatherproof waterproof columns and high-quality waterproof speakers, sound column with aluminum shell, corrosion resistance, resistant to sunshine and rain, sand and snow, plus good midrange Frequency response; speakers using international advanced molds, thickened high strength ABS box, cleverly designed mounting bracket to meet any installation needs, as well as treble transparent, bright, soft, not irritable, bass surging Strong, thick and strong; making this outdoor sound reinforcement not only has a pleasing appearance of pure white, the sound quality is more thorough and clean, beautiful melodious. In outdoor venues, the use of these two products is the good choice. The interior uses the FS-X4 wall-mounted speaker. This speaker is a compact, contemporary speaker with a wide range of universal applications. It features world-class, state-of-the-art molds and HIPS impact-resistant polystyrene for durability and sound quality.