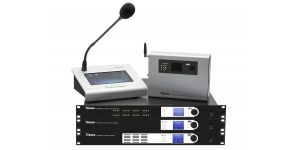 IP-9600 III Series Network Public Address System is a pure digital network audio control broadcast system based on IP network as transmission medium. It completely solves the problems of poor sound quality, limited transmission distance and lack of interaction in traditional analog broadcast. And it also breaks through the content limitations, space limitations and function limitations of traditional analog broadcast systems, achieving high stability and high reliability of the system. The system has the advantages of flexibility and simple operation, flat interface, good human-computer interaction and convenient management and maintenance.

IP-9600 III Series Network Public Address System transmits audio stream signals and control signals over the network, and simply connects the terminals to the Ethernet to form a powerful digital broadcast system. No separate wiring is required for each access point, and it can easily realize the transmission of audio and control signals with arbitrary paths and multi-tasks at the same time. Through powerful management and control software, the system can realize perfect application management control for different application occasions. Therefore, the application function and management function of the system are open and flexible, and can be changed and set according to requirements at any time. It is a set of digital broadcast system that can truly meet various practical applications.